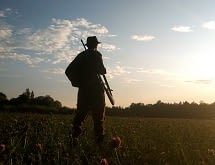 Wild hogs hunting in the morning

I remembered one story and decided to write it here about wild hogs hunting in the morning.

We hunt wild boars in various ways: near the bait, driven hunt, with dogs and others. There is a time of year when we hunt wild boars early in the morning. We are waiting for them to return to the forest from the farmers ’fields. This method of hunting is most commonly used in July and August. So from the beginning.

I don’t remember well, but I think it was the end of July. One farmer called me and asked me to guard his fields. The farmer complained that the wild boars were causing significant damage to his crops. I have a good hunting friend, his name Jurka. We decided to go with him and help the farmer. We agreed to drive not in the evening but in the morning at dawn.

At 3.00AM my alarm sounds. Time to get up. I was already ready for all the things in the evening. I quickly get dressed in hunting clothes and wait for Jurka. Jurka arrived punctually and we moved to hunting areas. It is still completely dark, there is no wind and very fresh air. I feel – the hunt will be a successful!

Briefly about the place where we will hunt. There is a big forest. About 100 meters from the forest is a farmer’s field with crops. We are lucky because the forest and the field are separated by village road. Our main plan is to come before the wild boars return to the forest and block their way.

About 2-3 kilometers left to the field. We stopped and took the rifles out of the cases. We have to be prepared. Sometimes there is a situation when the wild boars escapes when hears that somebody arrives. Ok, we are ready so we are moving to the field. The field width is about 200 meters, so for two hunters are perfect. I’m sitting in the passenger seat, so I’ll get out first. Jurka will leave the car and come by feet. Well, we move on.

We approach the field by car. Remained very close, maybe 100-150 meters and we see a herd of wild boars running from the field to the forest. I still tried to find a comfortable position to shoot but, but failed. You won’t do anything, it happens sometimes, but we stick on the plan.

We approached the field. I get out of the car. Jurka goes on. When Jurkai drives away and after turning off the car engine, I hear that there are still wild boars in the crop. The noise is high but I don’t see anything. Time is about 4.00AM. The sun has not yet come. I see Jurka’s flashlight from far away. I quickly pick up the phone and write him an sms to stop and not move because the wild boars are in the farmer’s crop.

For half an hour, nothing changes. Wild boars eat in the field, we stand and wait. It is already starting to shine. There will be action soon. I hear the wild boars start moving towards me. I’m preparing a shooting stick. I point the rifle in the field and start looking for boars. The wild boars moved straight towards me, but suddenly stopped. It probably could smell me. The wind was from the forest to the field.

Sensing danger, the boars changed direction and start running quickly towards Jurka. I see Jurka raising a rifle. I hear a shot. I see 8-10 boars running near Jurka. A minute passes, Jurka holds the rifle raised. I’m curious what’s going on, but I’m standing still. I hear another shot. Now I’m going towards him.

Jurka tells me the story that 8-10 boars escaped. The boars were fast and he didn’t manage to aim accurately.  He shot but not hit. After the shot he heard other boars outside. A minute later, one tried to escape from the field. This time Jurka’s shot was on target. He hunted a large, beautiful 3-year-old male.

We have achieved our goal. We hunted the boar. We protected the farmer’s fields. We decided to give the boar to the farmer and thus compensate him for the damage. The farmer did not expect this and was very happy.

This is wild hogs hunting in the morning

Here is Jurka with his boar